After our previous visit to the City Museum going horribly wrong (see Good days, Bad days), we thought it was time to give it another go!

So today we headed into the city (in the car this time, just in case!) to visit the Folk Museum with our home ed friends. We arrived with no dramas and had the whole museum to ourselves – despite it officially being closed they still take educational visits, which officially we are!

As soon as we entered the door, the big Ps were whisked off by their friends to the very top of the beautiful Tudor building. After following them up slightly more slowly, to marvel at the amazing wooden structure, my friend and I sat (on a flight of stairs), observed and chatted. Initially the big girls wanted our attention – something they are all used to having fully in both our home ed households – but they soon organised themselves into a fantastic game of dressing up and playing home in the Tudor times! Piccalilli played around us with toy animals and food, occasionally requesting our input, mainly to retrieve an animal that had been borrowed by a bigger girl!

We laughed lots about the teaching and learning that was happening on our educational visit! Seriously though, I do think the girls all got a sense of what clothes and beds were like in the Tudor times 🙂

We headed downstairs for some lunch, followed by some chocolate biscuit treats, followed almost immediately by five hyperactive girls… The rain had stopped so it was definitely time for a play and run around in the garden. More learning took place – playing with Victorian style toys, hiding in the Anderson shelter and discussing why the word ‘shop’ was spelled ‘shoppe’. We’ve covered so many eras today and we didn’t even make it into the retro rooms at the museum (so we’ll be heading back in a few weeks for a further educational visit!) 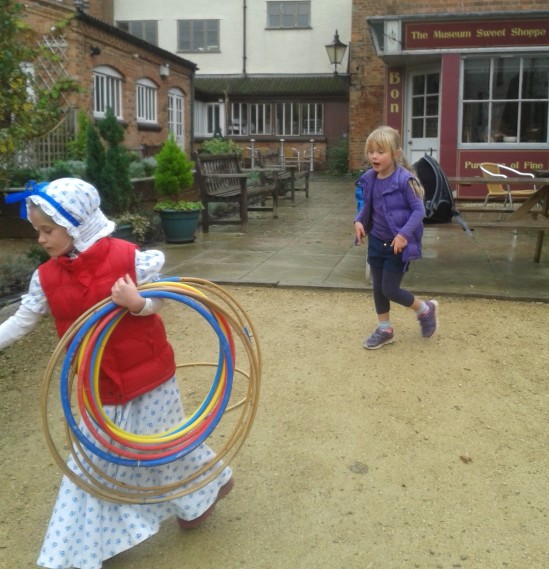 Everything was going so well until tidy-up time, when Poppet decided that, as the oldest child, she should be in charge (as the photo above captures so well!) and so didn’t like it when Pickle started to put things in the wrong place in the shed! We heard a lot of screaming and their friends exited the shed very promptly with worried looks on their faces and it turned out that Poppet had punched Pickle (a regular occurrence at the moment sadly). Time to go home…

3 thoughts on “Adventures in the City Take 2!”